Favored for offering low power consumption, a compact space envelope, superior speed of operation, and a high cycle life, a solenoid refers to a specific classification of valve that relies on the principle of electromagnetism to actuate the subject device.

How does a solenoid valve work?

Generally, a solenoid valve will consist of a coil, an orifice, or multiple orifices, and a linearly operating member that will seal closed or leave open the said orifice.

Perhaps more transparently put, the magnetic field created draws or forces the sliding member to this secondary posture, commonly described as the energized position. A variety of solenoid designs and configurations have arisen from this basic premise.

A direct-acting solenoid valve indicates that the design utilizes the magnetically responsive, sliding plunger to open or close the main media flow path through the valve. In other words, the movement of the control tube element in response to the generated electromagnetic field directly acts to open or close the valve.

This solenoid valve design incorporates the actuation of the valve into the valve itself without the need for a separate electric or pneumatic actuator to stroke the unit open or closed. This allows for a more compact design than most separately actuated alternatives. A 2-way, direct-acting solenoid valve has two optional configurations: either normally open or normally closed.

In the normally closed version of a solenoid, the seat on the sliding member, with the assistance of a spring to hold it in place, sits against the orifice keeping the flow path closed when in this de-energized, or normal, state. When energized, the pull of the magnetic field on the magnetized sliding member overcomes the resistant spring force, and the seat lifts from the orifice to open the flow path. When once again de-energized, the spring returns the valve to the normally closed position. 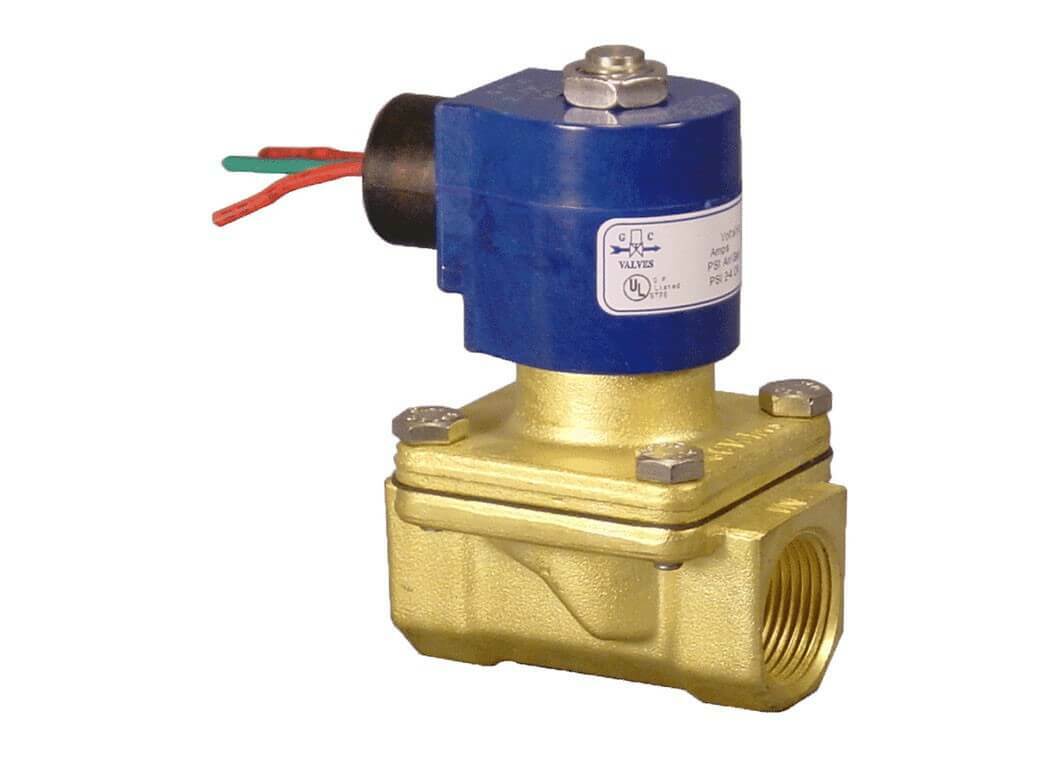 Bistable solenoids, also referred to as latching or switching solenoids, operate on a similar principle, though they do not utilize a spring to return the sliding member to its initial position. Instead, this design uses permanent magnets in lieu of a spring to hold the ferromagnetic sliding member in place when de-energized.

The pull of the magnetic field generated by the energized state of the solenoid proves stronger than the pull of the magnetic force of the permanent magnet holding the plunger in its initial position. When energized, the pull of the electromagnetic field lifts the sliding member from its initial position pulling it to a secondary posture. However, when once again de-energized, an additional permanent magnet holds the sliding member in this secondary position.

In order to return the sliding member to its initial location, one must energize the coil by specifically running the current in the opposite direction, which will reverse the polarity of the generated magnetic field and thus pull the sliding member from its secondary posture back to its initial position. When again de-energized, the first permanent magnet once more holds the plunger in this initial location. This action of technically switching between two stable, de-energized positions gives rise to the term switching or bi-stable solenoid valve.

While a traditional and bi-stable direct acting solenoid valve can prove limited in terms of line size, operating pressure, and flow capacity, a pilot-operated solenoid valve, sometimes referred to as an indirect-acting solenoid, can overcome these restrictions to a certain degree by constraining the action of the solenoid itself to the role of controlling a pilot orifice and using the service medium to assist in the opening and closing of the main valve’s flow path.

Like other internally or externally piloted valves, the main valve operates as a function of the disposition of the pilot valve. In a typical pilot-operated solenoid design, the main valve utilizes a diaphragm to seal the main flow path. A small orifice in the diaphragm allows the service medium to accumulate both above and below this component. The presence of this orifice allows pressure to equalize on both sides of the diaphragm.

In this pressure-balanced state, a light spring offers enough resistance to push against the diaphragm holding the main valve’s flow path closed. The solenoid valve, serving as the pilot, controls a second orifice that connects to the cavity on the top side of the diaphragm to the downstream flow path. Importantly, the orifice controlled by this pilot valve proves larger than the orifice that allows the service medium to equalize on both sides of the diaphragm. Thus, when this pilot-solenoid opens, the service medium evacuates from the cavity above the diaphragm at a faster rate than the said medium can reaccumulate through the pressure-equalizing orifice. 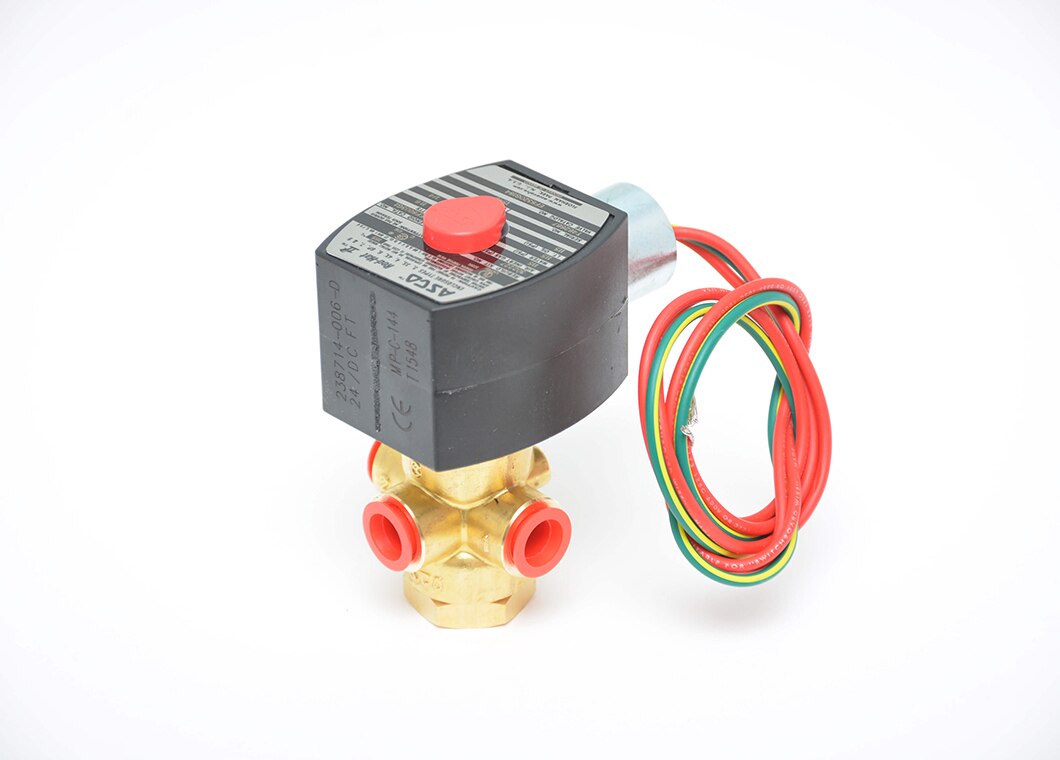 Though solenoid valves typically have two states, the energized position, and the de-energized position, this does not necessarily mean that a solenoid can only serve as a two-way, on-off valve with one inlet and one outlet. A 3-way solenoid valve, for instance, will have either have two inlets and one outlet or one inlet and two outlets depending upon the desired configuration.

In a mixing application, the solenoid would have two inlets and one outlet. The initial position of this 3-way solenoid would leave one of the two inlets closed while allowing media to flow from the remaining inlet to the common outlet. When stroked to the secondary position, the valve would open the formally closed inlet allowing media to flow to the common outlet and simultaneously shut off the flow path from the formally open inlet.

In a diverting application, the solenoid would have one common inlet and two outlets. The initial position of this 3-way arrangement would allow media to flow from the common inlet to one of the two outlets while the secondary outlet remains closed. When stroked to the secondary position, the flow path to the formerly open outlet closes and the flow path to the formerly closed outlet opens diverting flow to this secondary path.

Each will have an energized and de-energized position that influences the flow path of air through the solenoid. Among other factors such as hazardous area classification, specific approvals, the need to control the speed of the valve’s operation in both directions, and the selection of a double-acting or spring return pneumatic actuator will help to dictate the appropriate NAMUR mount solenoid required.

Need guidance in determining the appropriate solenoid valve for a specific application?

The experts at ValveMan have the knowledge and experience to help. Shop ValveMan.com today!