Valves play crucial roles in production lines and equipment performance across a multitude of industries.

In the selection process of valves, you have to take into consideration different factors that are specific for your application. First, you have to know what function you want the valve to perform. Whether it is for the prevention of backflow, flow control, separation of two different fluids or for other functions.

Another consideration is size. You should make sure the valve you are selecting is a proper fit for the pipe. Undersized valves could lead to the choking of the flow downstream and increase the upstream pressure. Oversized valves can regulate flow only over a close range and could lead to unnecessary increases in cost. After considering the function and size, the next step is to find the appropriate build material of the valve. The material chosen in the selection process must be relative to the nature of the media that would flow through the system to avoid potential problems such as contamination, leakage and general disintegration of the valve.

Before we list the types of valves there are, there are some terms in valve application that you must be familiar with.

Actuator: an actuator is a device that is used to open, close and control the valve. They can be actuated by pneumatic, electrical, and hydraulic means.

Manual actuator: these are actuators that do not require an external power source to activate the valve and are operated by levers, gears, or wheels.

Electric actuator: it converts electrical energy into the force that opens or closes the valve. These devices may run on AC or DC power. 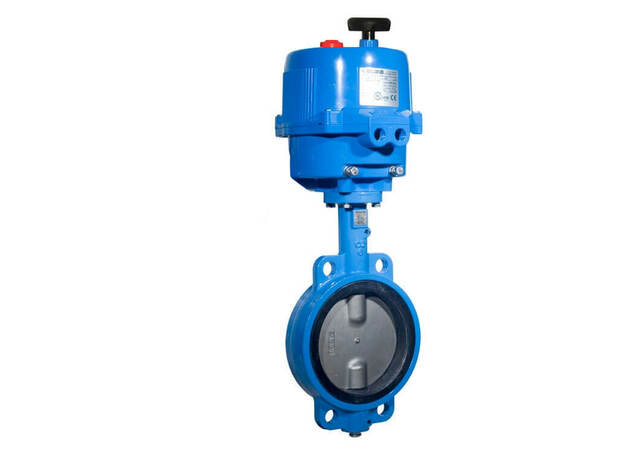 Pneumatic actuator: utilize pneumatics, that is, controlled compressed air systems to produce the force required to operate a valve. 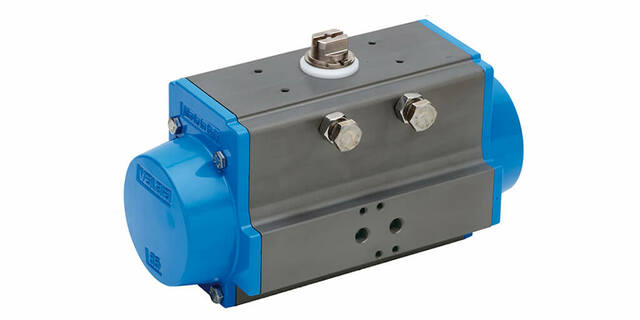 Flow path: this is the pathway in the piping system through which the fluid medium passes.

Backflow: backflow occurs in a piping system when the liquid changes its direction. This may be caused by the sudden turning off of the valve or a higher pressure on the outlet side than the inlet.

Diaphragm: The diaphragm is a flexible pressure-responsive element in the valve with which forces are transferred to the diaphragm plate and actuator stem to open, close or control a valve.

Water hammer: this is a phenomenon caused by pressure surge in the pipe due to backflow. Usually a result of a valve closing too fast or a pump shutting off.

Valve body: this is the outer frame of the valve that encloses the internal components. It is also the main pressure boundary.

Bonnet: this is the detachable part of the valve that provides access to the internal components.

Handwheel: an externally mounted device that is used to either open or close the valve. It is usually attached to the valve stem.

Trim: this is the configuration or arrangement of the internal components of the valve such as the stem and the plug, within the valve body.

Throttling: throttling is regulation of the flow rate in a piping system by adjusting the flow size.

Choked flow: this happens at the point where the flow can no longer be increased by lowering the downstream pressure at a fixed upstream pressure.

Closure member: a member that is placed along the flow path of the valve to modify the rate at which the fluid is flowing. There are the disk, plug, shuttle, ball, diaphragm, and gate.

As explained earlier, there are different types of valves that are best suited to different applications. These valves vary by build and, slightly, by mode of operation. The most commonly used types of valves are:

Ball valves are one of the most popular types of control valves. These valves control flow with a hollow ported ball that is turned by an external handles. Ball valves are quarter-turn valves. A quarter-turn valve is one in which its handle must be turned at 90 degrees to either open or close the valve. The medium flows through the valve when the holes in the hollow ball are aligned with the flow of the fluid and stops when the solid portion of the valve aligns with the flow.

Ball valves have a simple and flexible design, with a very high operating life. When properly managed, they can be used without needing repairs after numerous cycles (actuations). Depending upon the specific type and configuration, valves can take fluid of up to 15,000 psi and temperatures up to 752 Fahrenheit. The body is also offered in a variety of materials of construction depending on the specific type of valve selected. Similar to the ball valve, the butterfly valve is a fast-acting valve that uses the quarter-turn mechanism for opening and closing. However, instead of a ball, butterfly valves perform control using a round disc attached to a central rod, in a construction that vaguely resembles a stylized butterfly, which gives rise to the valve's name. Once the disc is turned and its cross section is perpendicular to the flow path, the fluid's flow is stopped. When turned back, the disc is parallel to the fluid flow and the fluid passes freely. The disc can also be turned gradually to regulate the speed of the flow. Butterfly valves have a variety of methods for their actuation. 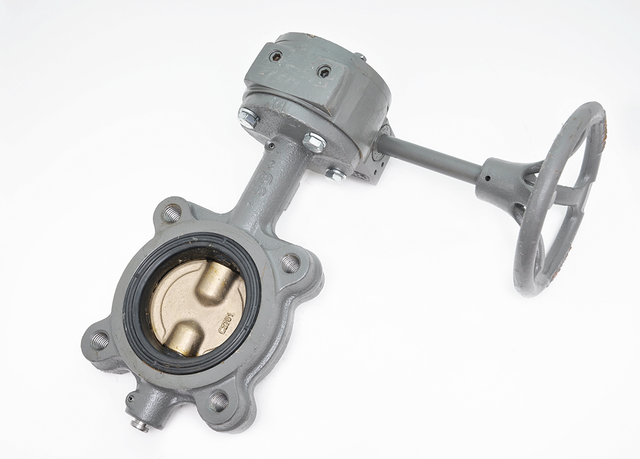 Gate valves use a plate-like barrier to either allow or stop the flow through the pipe. The gate only moves linearly in the vertical plane. Unlike the previously mentioned valves, gate valves are not rapid response valves. This means that the flow of the fluid cannot be stopped rapidly. This is because a gate has to be controlled gradually for it to be fully closed, to prevent it from slamming into the valve body. Gate valves cannot be used to regulate the flow of water.

Furthermore, standard multi-turn gate valves are most frequently employed as on-off devices as opposed to true flow control valves. In the industry, this type is mostly used in pipes of larger diameters due to the simplicity in its setup compared to other large valve types. These are generally costlier and harder to actuate as most actuation is rotary rather than linear (the operation of gate valves). 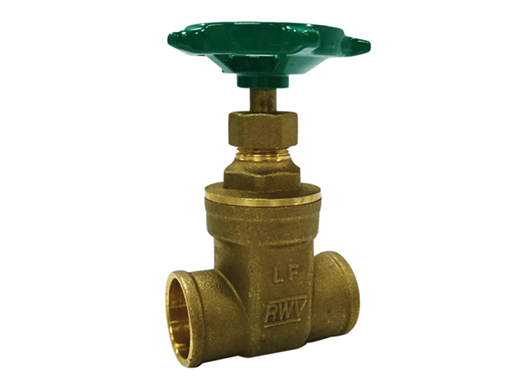 These valves are linearly actuated. As the valve's handwheel is turned towards the open position, a disc element travels linearly in the upward direction proportional to the flow of fluid through it. Globe valves have several types namely straight flow, angle flow, cross-flow, and the Y flow globe valves to be used depending on the flow pattern in them. Some of its disadvantages are that there is energy loss and pressure drop in the valve because of the number of turns the fluid takes passing through the valve and also, they are relatively hard to actuate.

Plug valves have a somewhat similar mechanism to that of the ball valve. They are both quarter-turn rapid response valves that employ hollowed out stopping mechanisms. The difference is that instead of using a spherical hollow ball, the plug valve uses a cylindrical plug that has a hole perforated through its ends. One sought-after characteristic of plug valves is that they have no voids within the valve that liquids can get trapped in and they are very easy to automate. The plug can also be simply adjusted to fix leaks that may get worse with time - unlike in the ball valve that would be either replaced or repaired leading to more cost. This type of valve is utilized by industries with severe applications, such as in corrosive environments like refineries and chemical plants.

Needle valves have a needle-shaped plunger embedded in them, with a conical end known as the needle to control the flow. Though the needle valve can be used for on and off application, it is most appropriate to use then for the control flow rates (mainly in pipes of lower rates) of fluid passing through the pipe. They are used in pipes carrying very clean liquids and gas such as propane. Check valves are unidirectional direction valves that are installed in piping systems to prevent the backflow of water or pressure surge. These problems are prevented by the check valve's self controlling ability, which ensures that the water flows in one direction. Check valves work using the difference in pressure between the inlet and outlet sides of the valve. When the inflow pressure is higher than the pressure on the outlet side of the valve, it opens, allowing the media to flow through. If the pressure on the outlet side becomes higher, the valve immediately shuts off, preventing reverse flow. There are several types of check valves depending on the application. These include the lift check valve, the swing check valve, the diaphragm check valve, the ball check valve, double disc check valves, and the stop check valve. The use of these valves ensures the longevity of the pipes and pumps as they help to mitigate, if not eliminate, the damaging effects of water hammer. The selection of these valves depends on the piping system's pressure, temperature, and flow requirements.

Angle seated valves are pneumatically actuated devices that utilize a piston actuator for their operation. This type ensures a very low-pressure loss and a perfect flow rate in its open position, thanks to its seat being placed at an angle. The flow is obstructed by the seat plug introduced to sit in an angled seat, molded into the path of the flow. When it is opened, the plug retracts almost immediately, making one of the fastest-acting valves with the lowest pressure drops. In industries, this type is prefered to some others due to its cost-effectiveness and longer-lasting nature. Another upside of the angle seat piston valve is that they can prevent water hammer in systems by just placing it in a reversed position. They are utilized in systems where there is a high flow rate and high pressure.

Also known as membrane valves, diaphragm valves are valves that utilize the pinching down of an elastic membrane, which is the conduit for the flow of the fluid, to stop or control the fluid flow. The diaphragm is connected to a compressor that moves linearly upwards and downwards, hence controlling the diaphragm. They are used in the food, cosmetics, semiconductors, and pharmaceutical industries. The coaxial valve uses a shuttle type of closure member for the control of fluid flow through it. It can either be pneumatically or electrically controlled. Coaxial valves are relatively larger than solenoid valves.

Piston valves use a cylindrical plug that is embedded in it, a piston that moves in a linear vertical motion to control the flow of fluid. This type is only for the on and off function and cannot be used for throttling. It is used for isolation functions. Piston valves have two types; the balanced, which is used in the high-pressure application and the unbalanced, for low-pressure services.

The pinch valve has a flexible tube as a conduit through which the fluid flows. The flexible elastic pipe is pinched together to stop the flow. This pinching is done by the application of air pressure or by mechanical actuation. When the valve is in an open position, it has no boundaries and allows the passage of different materials of different sizes. Pinch valves are utilized for systems where the fluids (for example, corrosive materials) must not be in contact with other parts of the valve. They are also used to convey slurries and granular materials. Industries such as cement, wastewater, chemical, beverage, plastic, glass, and food industries use the pinch valve.

Need guidance in determining the appropriate valve for a specific application?

The experts at ValveMan have the knowledge and experience to help. Shop ValveMan.com today!