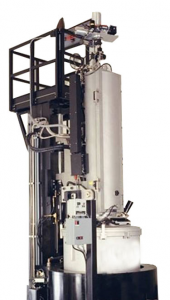 They called when the vacuum in their chambers to create silica crystals were not holding. The problem was chronic and could potentially cost the company millions of dollars. They told ValveMan that they had discovered air was getting into the chamber through leaks in the ball valve’s packing glands in which they had purchased from other suppliers. There was also positive pressure in the ball when the valve was in the off positions which caused a fluctuation in the vacuum in the chamber.

ValveMan’s solution was to install the 3″VMDM2500 pneumatically actuated, spring return, ball valve with aNEMA 4 solenoid. ValveMan supplied the valve with a vented ball which means they drilled a hole on the upstream side of the ball so when the valve was in a closed position and a vacuum was pulled, there was a vacuum in the ball as well. They also fixed the degradation of the packing gland issue by supplying a valve with high quality standards. Happy with the outcome, the Fortune 500 company has bought hundreds of the VMDM2500 series valves for their pure silica crystal manufacturing chambers.

Contact ValveMan for all your valve needs. We’re your one-stop valve shop.