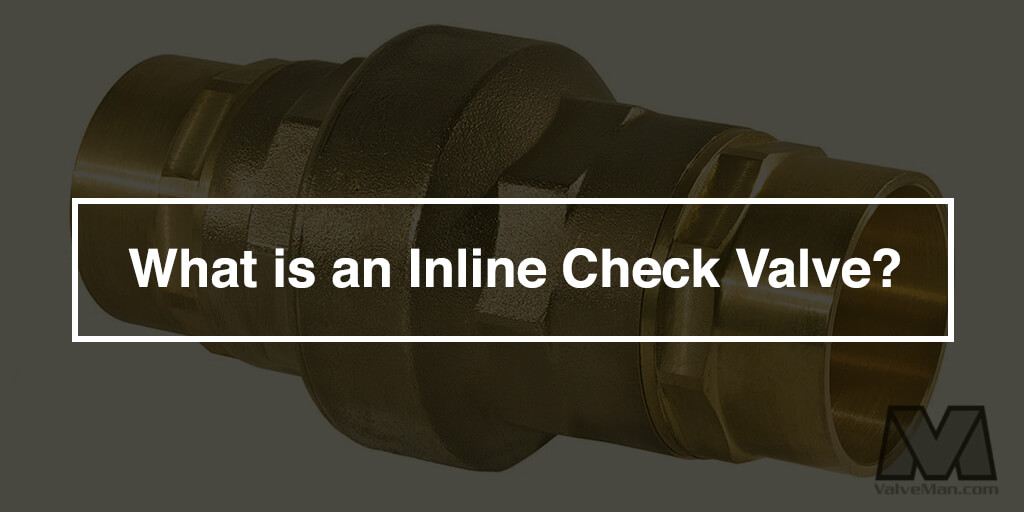 What Is An Inline Check Valve

Inline check valves are used by power plants, chemical processing plants, and countless industries that utilize pipelines for moving water and other fluids or gasses . Any system that uses a motorized pump will have one or more check valves. Also known as "non-return" or "one-way" valves, check valves are a very common but integral element in any piping system where unwanted backflow must be prevented.

Check Valves and How They Work

There are several kinds of check valves, but they all perform the same action. Each check valve prevents a gas or liquid from traveling in the wrong direction--this unwanted occurrence is known as backflow, and can cause serious damage, especially to a pump. A check valve will only open after it’s cracking pressure is met and exceeded in a process. This means there is enough pressure to push the valve open. If that pressure level falls, the valve will close automatically, preventing unwanted backflow. This is achieved in a number of ways, or a number of designs, rather. Some check valves incorporate a ball--such as in filtration systems for swimming pools--while others use a rubber diaphragm, or a disc. Each "plug" (the part of the valve stopping the flow) is controlled by the pressure of the upstream flow. In other words, they operate without any outside assistance, and simply respond to cracking pressure (to open) or back pressure (to close).

An inline check valve is great for many applications. Another commonly used phrase to explain an inline check valve is a silent check valve. The reason for this is that these check valves generally have a soft seat that the disc closes against. This soft seat helps with shut-off as well as noise. In the photo below, you will see the drawing of an inline check valve. In this drawing, the flow is coming from the left hand side and exiting on the right hand side. As the flow begins traveling from the left to the right, it pushes against the disc (5 in this diagram) and therefore against the spring (2 in this diagram) and allows the flow to travel through the process. In the case that the flow stops, the spring pushes the disc back into place and prevents any process backflowing (moving from right to left).

Inline Check valves are supposed to be foolproof: install-and-forget. But there are some subtle factors that can cause a check valve--inline or otherwise--to fail. One common enemy, known as "disc flutter," can occur when a check valve is installed to fit the pipeline, but not its pressure. Disc flutter means the disc (or plug, if you will) is stuck somewhere between "open" and "closed," allowing back flow through the system. The best way to prevent this is to ensure the valve matches the correct pressure requirements--(as established by ISO 8536 international standards). If the valve is under-qualified for the pressure, the upstream flow will cause damage to the seats and seals; if the valve is too large, disc flutter (which may also cause damage) will occur, or cracking pressure may never be achieved.

Where To Buy Inline Check Valves

Just like a chain is only as strong as its weakest link, a piping system is also only as dependable as the valves it relies upon. Likewise, the quality of valves is only as good as the manufacturer from which they were purchased, we know those manufacturers. If you are in the market for inline check valves, or any other type of valves, then you should buy from the ValveMan.com valve store. We've been in the valve business for five decades, and we know all about properly sizing check valves, pressure applications, and piping standards. That's because all we sell are valves. It's simply what we do, and we do it better than anyone else.